St Martin’s Catholic School was established in 1980 by the Brigidine Sisters.

The Brigidine Charism of ‘Strength and Gentleness’, strength in purpose, yet gentle in action, became the school motto and serves to guide all our actions, especially our relationships with one another. Our school logo displays the strength of the sun and the gentleness of the clouds.

The school was named after Saint Martin de Porres, a Dominican brother from Lima, Peru, who is the patron saint of Social Justice. The community life and culture of the school which exists today is the result of the successful integration of social justice values that Saint Martin is noted for with the Brigidine Charism.

St Martin’s Catholic School forms part of the wider Catholic Parish of Frenchs Forest consisting of Our Lady of Good Counsel, St Anthony in the Fields and St Martin’s. The two Catholic primary schools enjoy a very positive relationship and join together for various school and parish functions throughout the year. 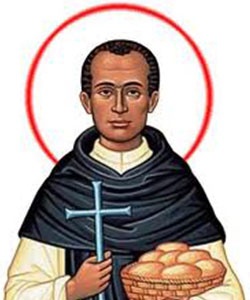 Martin de Porres was born in 1579 in Lima, Peru, the son of a freed black slave.

He was especially devoted to the sick and the beggars who gathered at the friary gate. He set up an orphanage and hospital for children of the slums and was also noted for his spirituality.

The 1st of February is the Feast of St Brigid. Brigid was born in Ireland in 453. Brigid grew up with a tender heart and as a child, she heard Saint Patrick preach, which she never forgot. She could not bear to see anyone hungry or cold, and to help them, often she gave away things. When Brigid grew up, she became a nun and started a convent.

Many years later in 1807, Bishop Daniel Delany founded a ministry to educate his poor parishioners and dedicated it as the Sisters to St Brigid. Bishop Delany took as his motto for the Brigidine Sisters, “Strength and Gentleness”. He himself was a man of great compassion, especially for those in need and was most gentle in his dealing with others.

"Nothing is as strong as gentleness; nothing is gentle as real strength."